“it is imperative that we correct black chapters in our history. That which was regrettably incurred against the northerners needs to be acknowledged. An apology is due to the north as the national President and I need that (addressing his audience) you do so with me,” Federal Somalia President, Mohamed Abdullahi Farmajo, addressing the national Somalia judiciary conference in Mogadishu, stated Thursday.

“I convey our regrets to the dead, the wounded, the traumatized,” he added.

He should have stopped there. He did not.

“Somalia did not invade the north. What happened was not clan-driven. A system carried it out,” he said.

Even there would have been debatable. But, he went on to make the greatest blunder of all compounding his dark history on reconciliation with the Republic of Somaliland, revealing what he really believed was the matter with the whole oppressed-against-oppressed struggle.

“But an apology is due also from those who took up arms against the system!” he added, jestingly.

He was rewarded with applause and mirthful guffaws.

Bold courageous statement unnecessarily ruined by the last sentence when he called for the people fighting against the brutal regime to also apologize. Strange way to draw moral equivalence between the actions of the regime & people standing up to the dictatorship. https://twitter.com/harunmaruf/status/1227952781350318086 …

BREAKING: Pres @M_Farmaajo has apologised for atrocities committed in Somaliland under previous Govt of Mohamed Siyad Barre. Nation needed to acknowledge, correct a dark chapter and apologise to our brothers who were killed, maimed in the north, Farmajo told a judicial conference 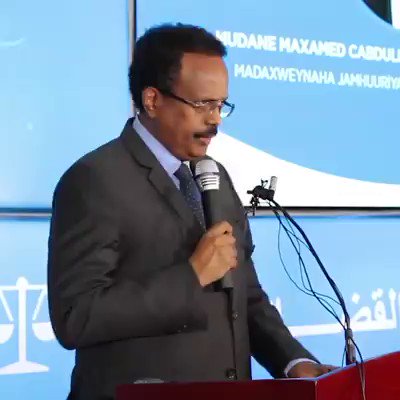 76 people are talking about this

The president was, of course, alluding to the hundreds and hundreds of thousands of Somalilanders who had either been killed, maimed, driven from their homes and the cities, wells and bridges destroyed in a systematic, ethnic cleansing strategy on the part of the military regime and its leader, General Barre, who happens to be his role model and kinsman.

The President was trying to project to his audience that nothing was wrong with strafing civilians from the air with mirage and F16 fighter planes flown by mercenary, foreign pilots.

The President wished to conceal the might and fury of one of the best-equipped, strongest armies in Africa in the late ’80s was unleashed on civilian populations destroying their homes and indiscriminately bombing them. That there was nothing with hundreds of civilians more taken out of dungeons, tied together, to be mowed down and dumped in shallow mass graves hundreds of which still remain undiscovered.

President Farmajo told his audience and the world that it was alright to get killed but not so alright if the hunted stood his ground and fought back.

The Somali National Movement (SNM) and the United Somali Congress (USC) he mentioned in his speech were, to him, criminally culpable renegades against a system he supported, and that levelling cities to the ground with the ‘system’s’ superior fire-power was justified.

President Farmajo, to his credit, admitted that Somaliland went into a union with Somalia sixty years back.

He, also, admitted they were short-changed since they (Somaliland delegates) did not negotiate equitable power and resource share with their counterparts.

But he, again, justified it in the most naive way possible.

“This shows they were sincere ‘nationalists’ who wanted to create unity,” he said.

By doing so, President Farmajo skipped what was wrong with that; why Somalians commandeered all the leading positions and the capital for themselves, and how, by doing so, Somaliland started protesting against the unfair domination –  a struggle which started in 1961 ending on the military coup of 1960 which effectively nullified all semblance of a shared government.

“The northern delegates were satisfied with not getting their fair share of the union to build a union,” he lied of history, adding with another misrepresentation of what happened, “the anomaly, the mistake was corrected after seven years”.

By that, he meant a Somaliland-born Prime Minister served under a Somalia President for the first time since the so-called merger. Egal was appointed in 1967  and elected in 1968 not because he represented Somaliland but by merit of his party and alliance with Somalia’s leading political party the SYL. General Barre overthrew this short-lived, last civilian government on 21 October 1969 and another nightmare for Somalilanders was born.

Mohamed Abdullahi Farmajo chose to not acknowledge the thirty-year-old democratic republic that was built from the ashes left behind by the brutal Somalia strongman it chased out so costly from its territory in 1991.

He also totally evaded using the word ‘Somaliland’ or ‘genocide’ even ‘massacre’, let alone the words ‘Republic of Somaliland’. throughout his speech.

By so doing, Farmajo reiterated that the mistake Somaliland made in 1960 made it a Somalia property to be dealt with as it wished – a mistake that may yet be the cause of fresh strife to tip over a fragile regional peace and stability as a whole.

Neither Farmajo nor the country he partially rules, Somalia, has yet to realize that Somaliland has since then corrected that ‘mistake’ and has fully restored the internationally recognized sovereignty it lost to Somalia in that fateful year hoping that NFD, Djibouti and Haud and Reserve Area will follow suit. They never did and so the merger was automatically nullified by the unrealized intent.