Following the first day of talks between Somalia and Somaliland, technical teams led by the respective leaders have entered talks as of today, according to reports.

This was followed by direct talks between technical teams with Djibouti minister of foreign affairs Mahmoud Ali Youssouf as facilitator, a VOA journalist, Harun Maruf; tweeted citing a source.

Whiles the host, Djibouti president Omar Guelleh is sitting through the talks, Prime Minister Abiy Ahmed of Ethiopia – who was part of the opening ceremony over the weekend, has since returned home.

President Guelleh and his pairs launch the work of the technical committees for collaboration between Somalia and Somaliland. 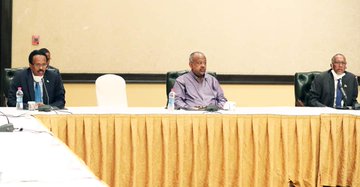 125 people are talking about this

Formerly a British protectorate, Somaliland merged with former Italian Somaliland in 1960 to create Somalia. But it seceded and declared itself independent in 1991 as Somalia plunged into chaos after the fall of the Siad Barre regime.

Somaliland has been pushing for independence ever since. It has its own government based in the self-appointed capital of Hargeisa, its own army and prints its own currency.

It is regarded by the international community as an autonomous region of Somalia and not a sovereign state. It is also considered much more stable than the rest of Somalia, which is plagued by clan disputes, corruption and a violent insurgency waged by the Al-Shabaab militant group.

Djibouti president said it was time for a rebirth of the Somali nation as leaders of Somalia and Somaliland met in Djibouti city on Sunday. Omar Guelleh tasked the leaders to think beyond today and for the future of the nation as it gears up to mark 60th independence anniversary.

Present at the talks was Ethiopian Prime Minister Abiy Ahmed.

I am pleased that the consultation summit on relations b/n Somalia & Somaliland, hosted by @IsmailOguelleh with the presence of @M_Farmaajo & @musebiihi took place today. This is a critical demonstration of open dialogue & reconciliation for national & regional dev’t. 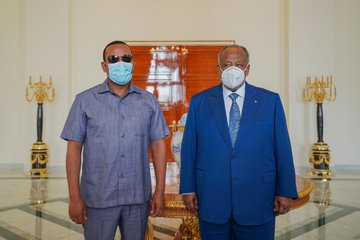 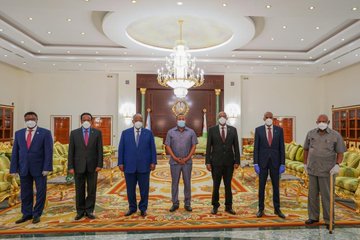 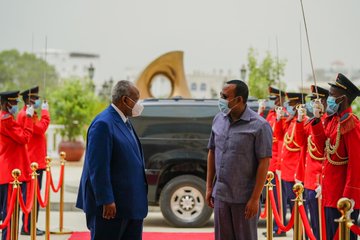 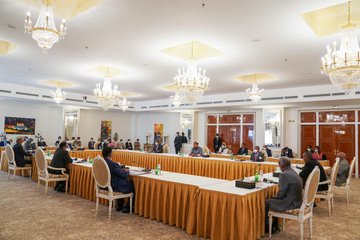 586 people are talking about this

It gives me great pleasure to be here with you today to restart the discussions between two brotherly leaders, two Somali leaders.

This is only the last of many such meetings you have had over the last 20 years and we still have hope that you will be able to have fruitful talks today.

As we all know, a few days from now, will mark the 60th anniversary of the end of colonial rule in the Somali territories. After the struggles of the last 30 years, the time for a rebirth is now. Indeed this new generation of young people are not burdened by the violence of the past and I believe they are the best suited to build anew.

With that in mind, I would like you to remember that this is not for or about our generation, it is not even about our children’s generation anymore but about our grandchildren and the idea we want them to have of the Somali Nation. We may be the ones in the room today but they will be the ones who will live with the decisions you make for them.

We know that not of all the problems will be solved here today but we also have to remember that just being open to discussions and be willing to get the men and women you lead closer together is the ultimate goal.

Putting aside the political side of things we would like to see beneficial outcomes in terms of free trade, free movement of people and goods as well as cooperation on all matters in order to provide opportunities to help your people prosper.

Once you have established a blueprint for cooperation, you can start to build on those achievements and ultimately give it any form you like.

There comes a time in every leader’s life when the people in the room have to make the decisions that will serve most of their people and do the most good for the largest part of the population. That political courage is demanded of you today and I believe that you are up to the task.

This is not a zero sum game where there is a winner and a loser. All we can ask is that you think beyond past failures and imagine what future is possible for your peoples.

I would like to thank you for trusting us today and wish you a fruitful discussion. As Djiboutians, we always remain hopeful that our brotherly Somali peoples will find a way forward together and we will always stand with you to help foster the best outcomes for everyone involved.

Djibouti president Ismail Omar Guelleh has confirmed the meeting between Somalia and Somaliland leaders. According to him, the two leaders are set to meet on Sunday June 14 in Djibouti.

The date is contrary to earlier reports that the meeting was scheduled to take place in the coming week. Ethiopian Prime Minister Abiy Ahmed is also expected to be part of the meeting.

Tomorrow in Djibouti, I will chair a meeting between President Mohamed Abdullahi Farmajo and President Moussa Bihi Abdi to follow up on the mediation efforts between the two leaders. I have also invited Prime Minister Abiy Ahmed to attend the discussions.

1,808 people are talking about this

Somalia, Somaliland leaders to meet in Djibouti next week

The meeting follows an invitation from the Djiboutian president Ismail Omar Guelleh. Reports say there will be representatives from the African and European Unions, United States and Ethiopia joining the meeting.

“Agenda for the summit between the two leaders has not been released but according to sources the two main topics of discussion will be to build confidence between the two sides and start a process that can lead to a negotiated settlement,” VOA journalist Harun Maruf said in a tweet.

“If the summit takes place it will be historic event. In a matter of days, Somalia and Somaliland will both mark the 60th anniversary of independence from the British and Italian colonies,” he added.

The two leaders met in Addis Ababa in February this year. A planned follow-up meeting in Somaliland, engineered by Ethiopia PM Abiy Ahmed, failed to materialize due to stern disagreement by political actors in Hargeisa, the Somaliland capital.

In between the two incidents, President Farmaajo admitted a dark chapter in Somaliland under the regime of Siad Barre. He was speaking at a judicial conference where he averred that the civil war didn’t start in 1991 but well before that claiming many lives in northern regions (Somaliland).

“We are here now, what is needed is where we go from here, it is go towards justice. What is needed is acknowledgment in seeking forgiveness for the bad things that have happened, to correct the dark chapter in our history, which means to express regret for the suffering in the north.

“To express regret, to apologize to our brothers, those who died and those maimed, to say to them that what happened was bad history, it is in the past. Indeed what happened there was not like the south invading the north, it was not based on clan, it was a government system that existed at the time.

“As the head of State, to express regret, and to convey our apologies to our northern brothers and you join in that regard with me.”

Somaliland: Prevalence of refractive error and visual impairment among school-age children of Hargesia