At the conclusion of a 4-day meeting between federal Somalia President, Mohamed Abdullahi Faramajo, and his regional states’ Presidents, the conferees decided on issues critical to the integrity, sovereignty and history of Somaliland.

Decision No 7 of a 15-point communique the meeting released states that members of the upper parliament Somaliland MPs will be decided by delegates ‘representing it.

“Upper House Members for Somaliland will be ‘elected’ by delegates representing it,” it said.

None elaborated on how that was possible in a Somaliland which a government elected to power on a 1P1V was at the helm – a stage that exists only on ink on paper for Somalia.

Decision point 8 of the same communique states that Somaliland members of the lower house of parliament of federal Somalia will be rounded from Mogadishu.

“Election of the Somaliland members of Parliament will be held in Mogadishu,” it said.

In other words, MPs will come from people who either lived in Mogadishu or travelled there to participate in the bounty as mercenaries representing none but themselves.

Neither the communique nor any of the conferring federal leaders – or the international partners supporting the conference – explain how a country that had independently run its affairs for the past 30 years could still be the subject of discussion in a Mogadishu that had the least influence over it.

The Republic of Somaliland is not a federal member and, hence, there was no call for federal members states to decide on matters encroaching on the republic’s independence, enraged Somalilanders told Somtribune.

“We believe federal Somalia would not have brazenly continued blind claims over Somaliland if it was not abetted and financially supported by the US, AU and the UN,” an indignant Somalilander stated.

Incumbent Somaliland members of the Somalia federal parliament were selected behind closed doors at Halane and the airport in 2016 under the auspices of UNSOM and other international partners.

Somalia left no stone unturned to isolate Somaliland politically and developmentally since then with a number of the development partners bowing down to the injustice in an attempt to force RoS to look up to Somaliland for implementation of its development schemes.

The fact remains, many argue, that the international community did not bring Somaliland together in 1960, did not separate them in 1991 nor can they ever force another fateful reunion.

“The international community is repeating the mistake it made in the ’80 by arming and diplomatically backing up a brutal military regime whose overthrow has cost the people of Somaliland untold number of lives, trauma, destruction and wealth,” another said.

“Now that Somaliland has rebuilt from the ashes, reconciled different groups of its people, instated a democratic system of government, freely and fairly elected its leaders, the international community is desirous to put 6 million citizens again under the mercy of Mogadishu can only happen in dreams,” a friend added.

In a recent statement, a US acting-ambassador stated at the UN that the United States had sunk over US$billion into Somaliland in the past two decades obliquely inferring that results in no way compared to the input.

Villa Somalia uses so-called Somaliland MPs selected through the UN-sponsored ala Mogadishu-style as rubber stamps for various purposes at top of which is political and security sabotage against a thriving Somaliland.

This last meeting lasted from the 13th to the 17th of September. International partners, particularly, the United States Embassy in Mogadishu, exerted great pressure on Farmajo and federal member heads to decide on key election matters following up on Dhuusamareeb I, II, and III. Communique reached at the end of the meeting overturns the majority of afore-reached decisions which appear to have been dictated by Puntland and Jubaland heads, Deni and Ahmed Madoobe, respectively, who threatened a boycott if their proposals were not accommodated.

The government of Somaliland, however, has not made known any communication with the international partners while the meeting was in progress or now that it ended – if any. Constituents expect that the government the strongest of terms to ask international partners to desist from politically aiding and abetting a regime which they know only exists by name and by virtue of billions upon billions of US Dollars squandered on experimental projects. A number of earlier statements on similar developments went unheeded putting a question mark on partners’ oft-avowed objectivity on Somaliland-Somalia affairs. 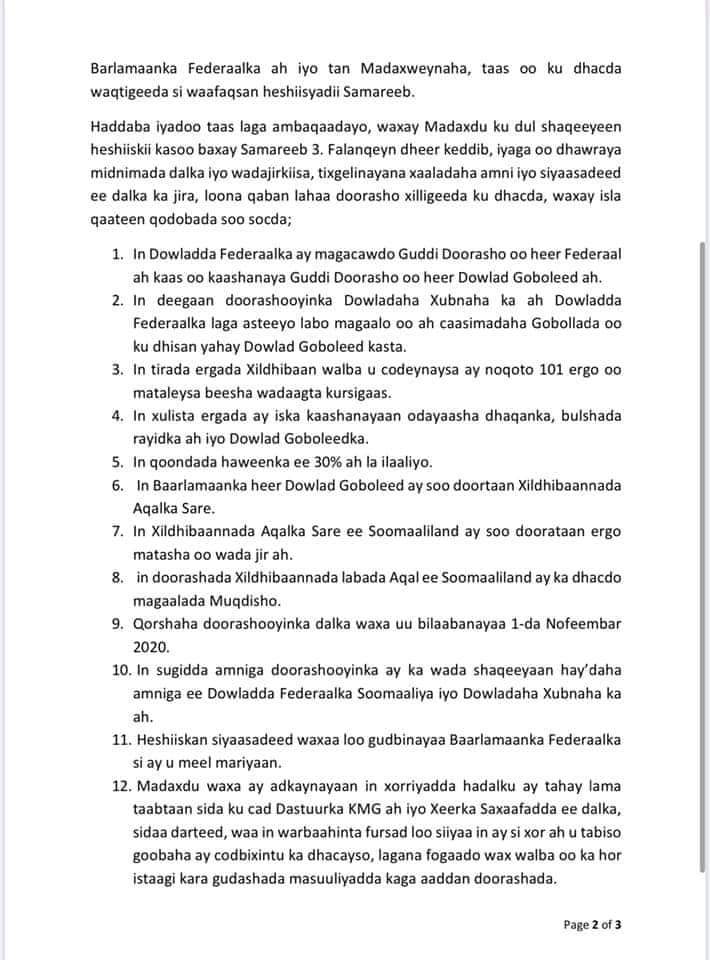