The Somalia International Partners showed dismay at the electoral model agreement which the President of the Federal Government of Somalia (FGS) and the five Federal Member States reached in Mogadishu on 17 September.

The partners, in particular, were not happy that the agreement did not promote the direct, public voting President promised his public and the world on this electoral cycle to decide a new batch of federal parliamentarians for both the lower and upper houses of that country.

“The partners observe with regret that the announced model falls short of the longstanding Somali goal of direct voting for members of parliament in this electoral cycle,” the partners said in a statement they released on Monday.

Even though, the partners made clear how disappointed they were in the model hammered out at the meeting between Farmajo and his regional states’ heads, they continued to note that they were not quite sure that even the process agreed upon would be that transparent. They had to highlight that fact by urging ‘that the 2020/21 electoral process be free, fair, transparent and inclusive’.

Same as the rest of a majority of political observers, the partners did not miss that there was an agenda behind the much-debated electoral caucuses, number of voters to decide MPs, and the inclusion of clan chiefs and dubious representatives to decide key senators and MPs in the process.

The President – per his plans – will, of course, exert much pressure influnece on who was to come out in the thirty-percent quota for women and an additional number of so-called Somaliland MPs.

Somaliland is a republic that has already put six 1Person-1Vote elections behind it on which results three presidents changed places.

Behind-a-door selection of mercenaries, as Somalilanders put them, to represent a country that would indict them on sight for the inraction is a poor excuse on the part of the international partners financing the exercise for building Somalia.

The FGS-FMS communique stated that the ‘ representative delegates will elect Upper House Members for Somaliland’ and that ‘election/selection of ‘Somaliland members of Parliament will be held in Mogadishu’. 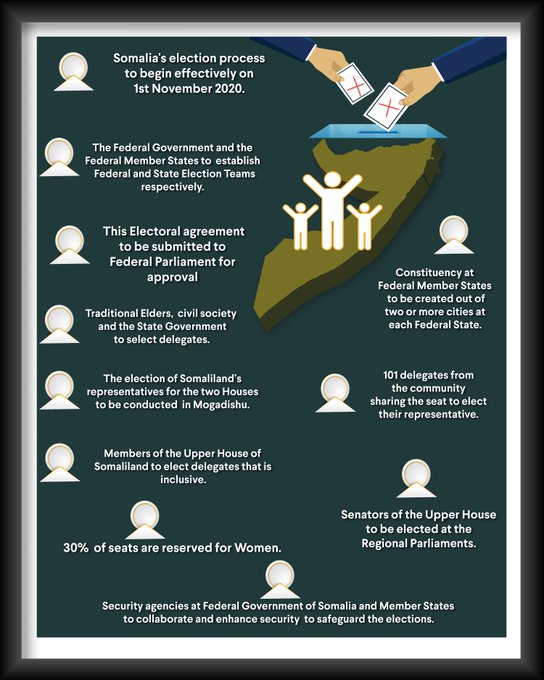 Somalilanders, again, have long derided the double standards of the partners when it came to upholding democratic precepts.

The UN, the US, the AU and the EU, political pundits prophesy, will one of these realize the political, human rights blunders against the people of Somaliland and how these partners cannot even hold a straight face when it came to the defense of the very principles they so vehemnetly advocated for in the past.

The Statement as below.

Mogadishu – International partners* take note of the agreement announced by the Federal Government of Somalia (FGS) President and the five Federal Member State (FMS) Presidents regarding the 2020/21 electoral process.

They acknowledge that this agreement resulted from a Somali-led and Somali-owned dialogue among FGS and FMS leaders, and understand that some details of the agreed process are still to be clarified and additional stakeholders may be consulted.

The partners observe with regret that the announced model falls short of the longstanding Somali goal of direct voting for members of parliament in this electoral cycle. The partners urge that the 2020/21 electoral process be free, fair, transparent and inclusive.

Looking to the future, international partners encourage rapid progress to establish other Somali democratic institutions, including the judicial services commission and the human rights commission, along with efforts to advance the review of the Provisional Federal Constitution and ensure respect for international commitments on human rights.

Partners would also welcome a roadmap with clear milestones, agreed among Somali political leaders, to ensure decisive democratic progress going forward. International partners appeal to the FGS and FMS leaders to continue meeting regularly in a spirit of dialogue and compromise to address urgent national priorities, including security and economic reform as well as inclusive politics.

Violations Against Children on the Rise in Somalia